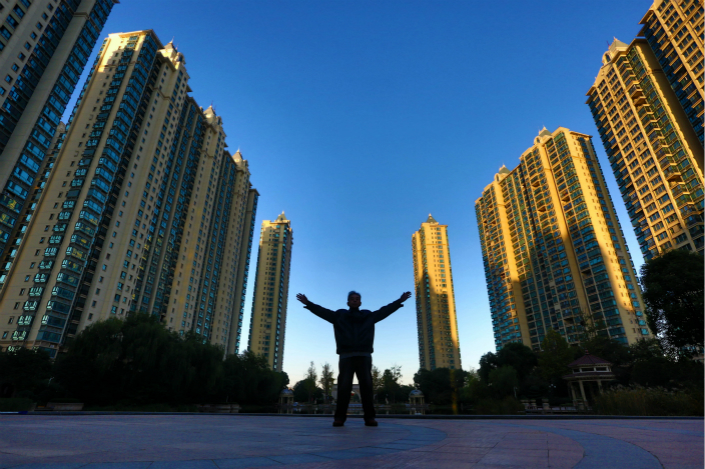 Huang Qifan, a vice chairman of the Financial and Economic Affairs Committee of the National People’s Congress, said Thursday that China’s planned property tax “is an important reform arrangement for a healthy and sustainable housing market.” Above, residential buildings are seen in Huaian, Jiangsu province,

China may start to levy a long-expected property tax in the coming few years, a senior official with the top legislature’s financial committee said at the 8th Caixin Summit on Thursday.

The central government has accelerated the drafting of a property tax law since it started to experiment with this kind of tax in some cities in 2011, hoping to diversify local governments’ sources of income and control property speculation.

But the draft law has not yet been submitted to the National People’s Congress (NPC) for deliberation due to debates over the law and concerns about the possible impact of the new tax on various groups in society, NPC spokeswoman Fu Ying said in March.

Huang Qifan, a vice chairman of the NPC’s Financial and Economic Affairs Committee, said at the Caixin summit: “Generally speaking, this is an important reform arrangement for a healthy and sustainable housing market. You won’t have to wait for 10 years or 20 years. The government will start levy the tax in the next few years.”

A property tax will improve the integrity of China’s tax system and reduce speculation in the country’s real estate market, he added.

Instituting a property tax will improve the tax system’s integrity by adding a direct tax to a system made up of indirect levies, Huang said. The tax could also cool real estate markets where speculation has driven up prices over the last few years, he said.

A property tax will also push more homeowners to rent out idle properties to cover their tax payments, making better use of the country’s current housing stock, Huang said.

Xu Lin, a director of the urban development and reform center at the National Development and Reform Commission, China’s top economic planner, also said at the Caixin summit that a property tax will encourage governments to take a tougher line on polluting or unsustainable economic activities by giving them another income stream.