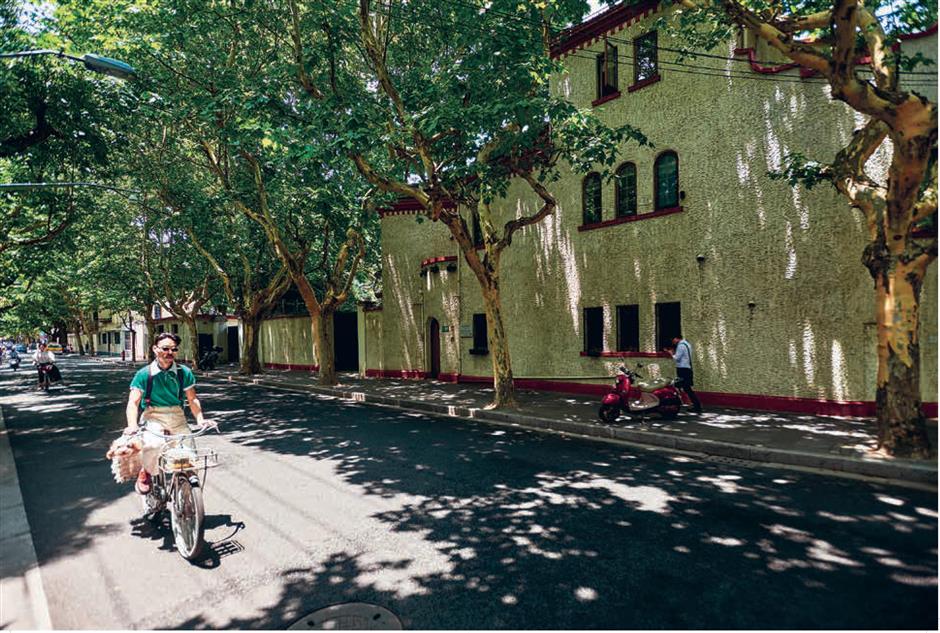 A man cycles along the tree-lined Wukang Road.

A book on the history of and historical buildings on Wukang Road was launched at the Shanghai Book Fair.

“Shanghai Wukang Road,” in Chinese and English, is authored by Michelle Qiao, a senior reporter and columnist on architecture, with photos mainly by photographers Zhang Xuefei and Shao Lu. It is the 10th in a “city walk” series published by Tongji University Press.

Qiao said she decided to write the book as the 1,183-meter Wukang Road, with a number of former residences of famous characters in Chinese history, had become popular in the past few years.

Qiao moved into a lane on Wukang Road in 2009, when a rejuvenation project had just been completed.

“While Wukang Road had become cleaner, neater and more beautiful, it remained quiet and unknown,” said Qiao. “Before the renovations, I often had to clarify my address to people by adding ‘near the Shanghai Library’.”

Today, the road is one of the city’s star streets, where couples can be seen posing for wedding photos, models for fashion shoots and tourists strolling around for nice coffee, ice-creams and old buildings.

According to Qiao, Wukang Road has a solid base for being a popular historical street as it was well planned and built as a high-end residential area to accommodate the city’s growing wealthy population around the 1910s.

It was first built as a nameless road in the 1890s, but was expanded and officially named Route de Ferguson in 1907 to honor the contributions of the American missionary John Calvin Ferguson.

Crisscrossed with fields, villages, graveyards and small rivers, the neighborhoods surrounding the road quickly grew to be an idyllic, convenient community graced by garden villas and apartment buildings during the 1920s and 1930s, mirroring the then popular “Garden City” concept in many ways.

In the 1936 “Great Shanghai Guide,” Qiao found the neighborhood on the road was hailed as “the city’s neatest environment and freshest air.”

A rejuvenation project began in 2007 as the city became increasingly concerned about protecting its history.

Wukang Road was lucky enough to be selected in 2007 as the first street for the city’s pilot revamp project and regained its natural beauty.

In 2013, Xuhui District decided not to sweep the leaves on the tree-lined Wukang Road, attracting more people to enjoy the golden fallen foliage in autumn. Meanwhile, chic restaurants and cafes have also popped up on the street in recent years.

“Although the instant popularity of Wukang Road is in large part attributed to the efforts of the former French council to create a pedestrian-friendly street some 100 years ago and to the efforts of the Shanghai government to revamp a historical street 10 years ago, ultimately it was the result of modern people’s craving for a better city and a better life,” said Qiao.

Zheng Shiling, a professor at Tongji University and an expert in urban planning, wrote in his foreword for the book: “Wukang Road is not about those grand narrations and never wins applauds in terms of its impressive scale, grand commemoration or superficial vanity. It’s rather a space of everyday life, where people relax, play, date, read, chat, sit idly, sunbathe or simply daydream. This is a road to inspire creativity and to arouse people’s love for life and our city.” 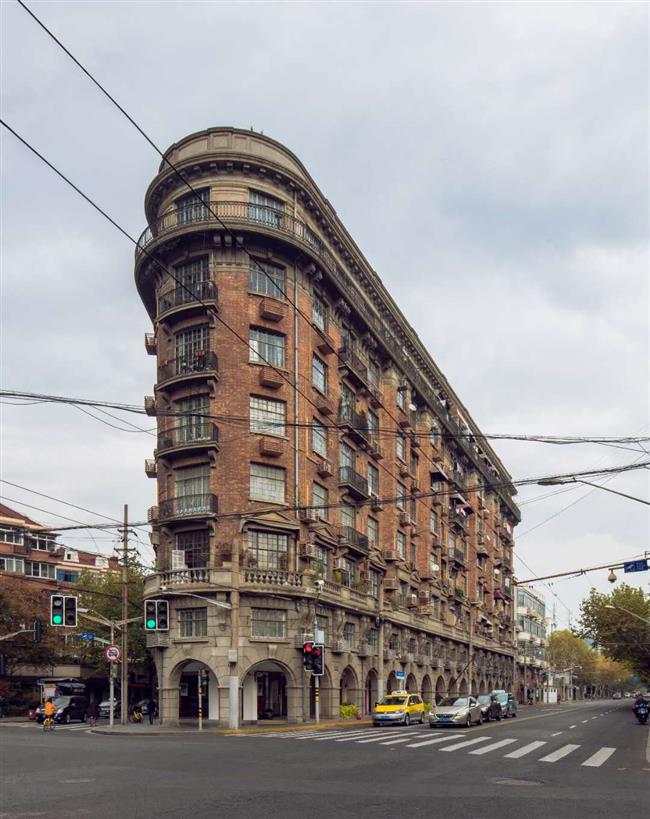 In the book, Qiao writes about 20 historical buildings in and around Wukang Road, telling the history of the buildings and stories of the residents.

The most famous building is the Normandie Apartments at the intersection of Wukang Road and Huaihai Road M. It is a signature work of architect Laszlo Hudec and is often referred to as the “little Flatiron” in reference to the famous New York skyscraper which it resembles.

The book also includes a chic modern villa at No. 4 Wukang Road. It was a gift from former silk tycoon Moh Shangqing to his daughter Pearl and son-in-law Tsai Hsiung in the 1920s. The most striking decoration inside the house is a gigantic family tree that covers an entire wall.

The gray-walled villa at No. 67 Wukang Road was once the home of Chen Lifu, who had been an influential Kuomintang official, while his elder brother Chen Guofu lived at No. 107.

The Chen family was one of the four most influential and richest families in the Republic of China period, and Qiao said the villa on Wukang Road were relatively simple and unadorned, compared with his other houses. The three-story villa is now shared by several families.

At No. 99 Wukang Road is the former residence of JF Macgregor in the 1930s. He was then president of the St Andrew’s Society and chairman of Messrs Caldbeck Macgregor & Co Ltd, a British wine and spirits company. The company dates back to 1864 and is better known for its Chinese name Zheng Guang He, which means “purified, widely-loved and pleasing.”

The book also has details of the homes of Tao Shaoyin, the first premier of the Republic of China; Ba Jin, a famous Chinese writer; former Chinese leader Deng Xiaoping and first Shanghai Mayor Chen Yi.

The 162-page book is small and convenient to carry, attracting many readers when Qiao and Zhang gave a lecture during the book fair.

“It’s really helpful for me as more and more people come to visit Wukang Road, including Chinese and foreigners,” said Pan Shengkang, a tour guide. “The book can help me to introduce more interesting stories to tourists.”

“It’s also helpful for free walkers like me,” said a woman surnamed Lin. “I have visited Wukang Road several times. Though the facades of the houses are beautiful, I actually knew little about their history. After reading several chapters of the book just now, I feel the road is more attractive to me and I will carry the book with me next time I visit Wukang Road.” 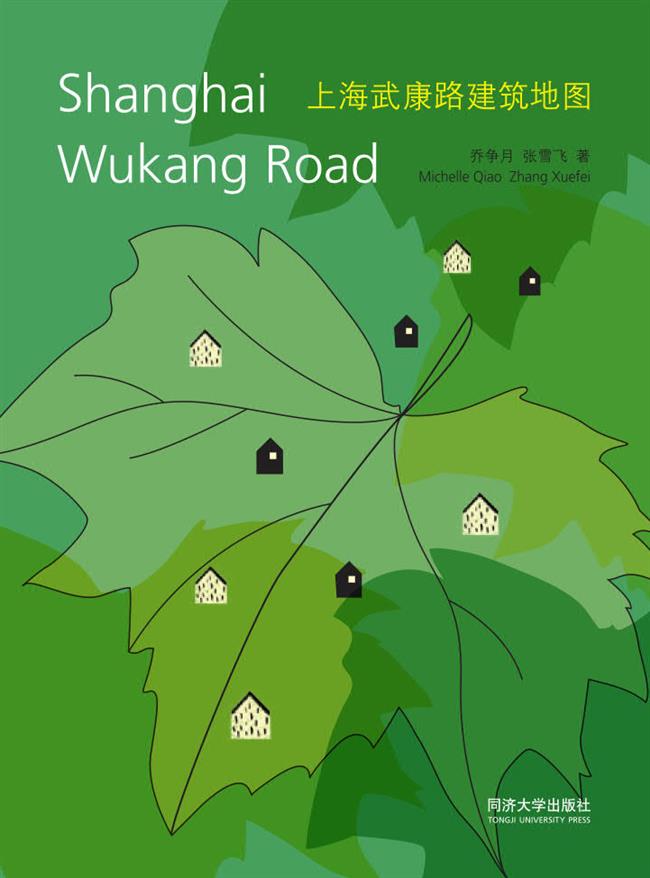