Lyft CEO John Zimmer admits that a few years back he got depressed when he realized that Usear had 30 times more cash than his company.

“I didn’t know what to do … I got overwhelmed(1) with the things I couldn’t control,” Zimmer told CTS’s Laurie Segall. During that period, he said, he was “slow to lead.”

Zimmer eventually came out of his funk(2). And Lyft not only survived, it filed plans just last week to go public(3).

But Zimmer’s experience of feeling defeated at a critical stage is far more common than a lot of CEOs are willing to admit.

Whether your competitor gets more funding, captures bigger market share or nabs a choice client, here’s what you can do to ensure the success of your own company long-term:

Make it a priority to take care of yourself physically and mentally, especially if you are depressed or anxious in the wake of what you perceive to be a defeat(4).

For instance, meditating even for a few minutes in the morning and the afternoon can give you a chance to reset yourself, much the way sleep can, Bregman said.

In cases where you were directly competing for something (e.g., a big client), consider offering your congratulations to the competitor who won out.

“There is no downside(5) to it,” Bregman said. If anything, youdistinguish yourself(6) and you plant the seeds for a relationship, which can bear fruit(7) down the line.

And success is never an all-or-nothing proposition(9).

“There’s always room for more than one successful company in every market,” said Dana Severson, cofounder of Startups Anonymous, a platform for founders to confidentially share their stories and challenges.

Also, just because a competing firm gets a big round of funding doesn’t mean there won’t be enough for you. “There is so much money out there if your idea is good enough,” Bregman said.

“People often think funding is a victory in and of itself,” said Severson, who’s founded other startups, including gourmet beef jerky seller Stick in a Box.

What’s more, big funding brings big expectations and demands. It may even mean your competitor will need to take on a different kind of client than you’d like, he said.

And while more money means the other company can spend more than you on marketing and hiring, “that doesn’t mean those are necessarily good business decisions,” said executive coach Jerry Colonna, a founder of Reboot, which provides counseling and boot camps for CEOs, founders and venture capitalists.

The best thing you can do for your company — and your sanity(11) — is to pay attention to what you can control.

“Stay focused. If you spend the entire time looking left and right when you swim, you’ll lose,” Colonna said.

Especially focus on the quality of your own work. What does your company offer that distinguishes it from others in the industry? And what can you learn from your competitor to make improvements?

Once you’re clear on answers to those questions, and have gotten some perspective on your current situation, you’ll be better positioned to motivate and encourage your employees for the challenges ahead. 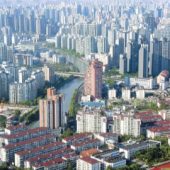