Citywide, outlying Qingpu remained the best performing district, although it also took a plunge. About 13,200 square meters of new homes were sold there, a dive of 39.5 percent from the previous week. Jiading District and Nanhui in Pudong New Area followed closely with weekly transactions both hovering around 11,100 square meters, a decrease of 25 percent and 38.3 percent, respectively, according to Centaline data.

“Buying sentiment fell for the third consecutive week and seven-day sales of new houses dropped below the 100,000-square-meter threshold for the first time in four weeks, evidence that the market was short of strength for a major rebound,” said Lu Wenxi, senior manager of research at Centaline.

On the supply side, only about 22,800 square meters of new houses from one project were launched into the market, a plunge of 87.3 percent from the previous seven-day period.

Since April, a total of 11,200 new housing units spanning 32 projects have been released into the local market and some 3,500 units out of that were sold, according to a separate report released today by Shanghai Homelink Real Estate Agency. 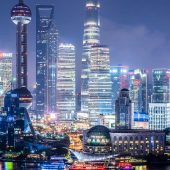